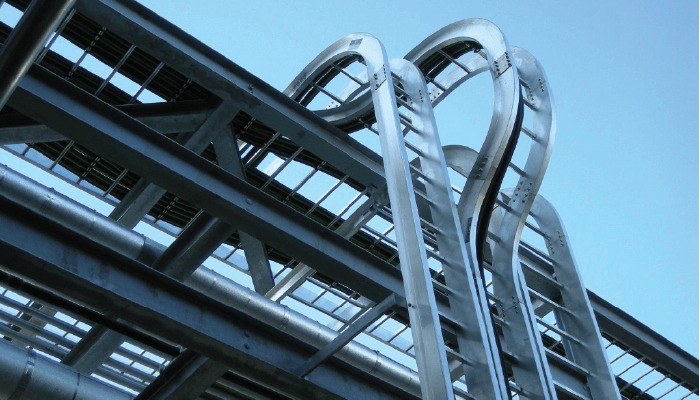 NEMA stands for the National Electrical Manufacturers Association. NEMA ratings are standards that define the types of environments an electrical enclosure can be used in. VE2 is a NEMA standard that outlines cable tray installation practices, material control, and unloading/storage standards.


Cable trays can provide a safe component of a wiring distribution system. However, if not designed and installed properly, wiring inside cable trays may pose hazards such as fire, electric shock and arc-flash blast events. During the maintenance, installation and inspection of cable trays, the following concerns should be taken into consideration.

● Cable trays, and the conductors and cable they contain, must be listed or labeled by a NRTL as suitable in the environment in which they are installed.
● Where cable trays pass through fire-rated partitions, walls and floors, appropriate fire stops should be provided in accordance with guidance provided by NEC Section 300.21 to prevent the spread of a fire or the by-products of combustion.
●  Cable trays in hazardous locations must only contain the wiring permitted in such locations.
● Cable trays must be properly supported in accordance with the installation instructions. Overloading cable trays can lead to a breakdown of the tray, its connecting points and/or supports, causing hazards to persons underneath the cable tray and even leading to possible electric shock and arc-flash/blast events from component failure when the cables are suddenly no longer supported.
● When cable trays are overfilled, excessive heat build-up in and around live conductors can cause the insulation to break down, leading to potential shock hazards or fires.
● The fill values for cable trays specified in the 2005 NEC range from a single layer to roughly a 50% fill of the cross-sectional area of the cable tray.
● When cable trays are overfilled beyond the fill criteria established by the NEC, add another cable tray system above, below, or next to the overfilled tray. Allow enough working space around the added cable tray.
● Grounding of cable tray systems is essential for personal safety and protection against arcing that can occur anywhere in the wiring system. Proper grounding must be done before cables are installed and tested before cables are energized.
● Abandoned cables within cable trays should be removed. • Work on cable tray installations may expose employees to live parts. According to 29 CFR 1910.333(a)(1) deenergization of live parts to which an employee may be exposed is required before employees begin work on or near them


In the National Electrical Code (NEC®) guidebook, section 392, the instructions and specifications for installation are highlighted. It states that the cable tray is to be installed as a complete system.

As a whole, the system shall provide a secure, safe and supportive method of stored cables and wires. To ensure this, the designer must properly select a structurally satisfactory cable tray for their installation. This selection is based on the cable tray’s strength, the cable tray loading and the spacing of the supports.


The most significant part of the installation, in accordance to the (NEC®), is that the metallic cable tray system must have electrical continuity over its entire length and that the support for the cables must be maintained


These requirements can be adequately met even though there will be installation conditions where the cable tray is mechanically discontinuous, such as at a firewall penetration, at an expansion gap in a long straight cable tray run, where there is a change in elevation of a few feet between two horizontal cable tray sections of the same run, or where the cables drop from an overhead cable tray to enter equipment.

Why Overloading Of Cables Should Be Avoided At Every Cost? | Cable Tray Maintenance |  Measures that Every Industry should take in the wake of Covid 19 | Why Cable Trays Install in Industries & IT Organization? | The Best Way to Keep Your Cables Protected